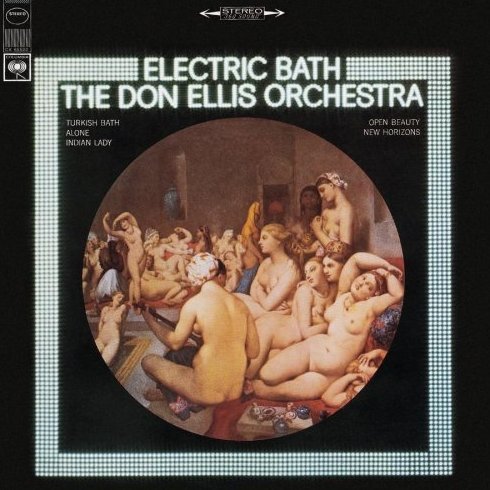 I am going to try to share a few albums frequently as this blog starts out so there is a decent amount of material. As I stated with my previous post, I'm trying to share some music that shows what kind of material will be on this blog as well as having a personal connection. In my personal opinion, Don Ellis is probably one of the most avant garde figures in big band jazz. Don Ellis played with Maynard Ferguson,  jazz pianist George Russell, and was prominently featured in Gunther Schuller's Third Stream piece "Journey into Jazz" (1962). After attending the ethnomusicology program at UCLA in the mid-1960s, Ellis began to form influential groups the first which was the Hindustani Jazz Sextet. This group was never recorded but it combined aspects of Indian classical music and jazz music.  One can hear how elements of Ellis' original sextet and past history made it on to this album. Most notably this interest in Indian music can be heard on the track "Turkish Bath," which starts out with Ellis' teacher, Harihar Rao, on sitar, and "Indian Lady" which is essentially built on a drone pitch. One can also see George Russell's influence on this album in the form of his Lydian Chromatic Concept. If you listen to the electric piano on "Open Beauty,"you will hear open fifths ending on the raised fourth degree (in this case an F#). For first time listeners there will be a lot of surprises on this album. From the first thirty seconds of the album you may have your first introduction to quarter tones which may be weird to some, even unpleasant to others. Another surprise will be the presence of a lot of odd musical meters such as 7/4, 5/4, and 33/16. Colloquially speaking, it would be very hard to dance to most of the tracks on this album. The most accessible tracks will probably be "Indian Lady" and "Alone," whereas "Turkish Bath" might be unpleasant to some. From my own experience it took me a few listenings to really appreciate this album for its aforementioned differences, but it has grown to be an album I turn to when I want to listen to great music that is intellectually engaging.
Posted by The Mystic at 7:12 PM